Early playing cards dating to the 15th C are rare and the decks that have survived are fragmentary. This deck is the result of a collaboration of academics studying playing cards of this period, looking at incomplete decks and fragmentary card combined with illustrations of the same artistic style and date to produce a complete 52 card French suited deck.

The pip cards follow patterns known to the 15th C and later though many other patterns, including those similar to those used today were also used. This led to confusion since familiarity with one deck led to quick recognition but difficulties with alternative decks. Standardistaion in the 19th C overcame this problem. The Court cards follow conventions laid out in decks of playing cards of the 1460s with the Kings and Queens crowned and seated with the Kings holding swords and the queens holding sceptres. The knaves stand and hold a variety of weapons.

The colours used for the court cards are vermillion, Verona green and a yellow extracted from weld. Blue colours were expensive and were rarely used for ephemeral items such as playing cards. Such cards would have had the black outline of the pictures on the court cards printed from a carved woodblock and then the colours stenciled on top. The pip cards were all stenciled.

Note; this is a full 52 card deck but does not have Jokers which were introduced in the 19th C. 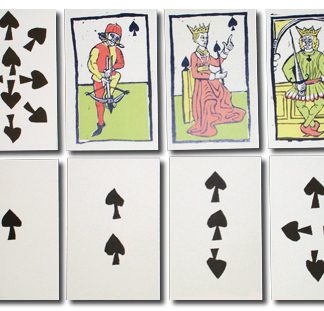