A lover may freely accept from her beloved these things: a handkerchief, a hair band, a circlet of gold or silver, a brooch for the breast, a mirror, a belt, a purse, a lace for clothes, a comb [pecten], sleeves, gloves, a ring, a box, a keepsake of the lover, and, to speak more generally, a lady can accept from her love whatever small gift may be useful in the care of her person, or may look charming, or may remind her of her lover, providing, however, that in accepting the gift it is clear that she is acting quite without avarice.

Combs are among the oldest tools found by archaeologists, and have been discovered in Stone Age settlements dating to 5,000 BCE. The oldest combs were practical, having tightly spaced teeth used to rid their owner of lice and other vermin that infests body hair. Later combs have wider spaced teeth more suitable to simply detangling and dressing the hair.

The H comb – so called for the H-shaped structure framing the teeth- developed with narrowly spaced teeth on one side for cleaning and hygiene and more widely spaced teeth on the other for hair dressing.  H combs seem to have developed in Northern Europe in the early medieval period, while in the Middle East they date back more than 2000 years.

The word comb appears in middle English before 900, and references appear in literature rather early.  In late medieval Europe, especially France and Italy, beautifully decorated combs were considered a desirable gift from a lover to his lady. The comb could be teamed with a matching mirror and hair parter (gravour), and fitted into a dressing case (trousse de toilette), typically made of leather. Boxwood, bone and ivory were most commonly used.

Examples of wooden H combs abound in the archaeological record. The delicately waisted shape and pierced lattice design of ours has been taken from wooden examples in the Hermitage Museum, St. Petersburg and the Archaeological Museum of Novgorod, Russia; the Museum of London, the Mary Rose Museum and the Portable Antiquities Scheme in England, as well as ivory examples in the Walters Gallery in Baltimore (US) and the ‘Gothic Ivories’ catalog from the Courtauld Institute of Art in London, England.

Each comb is hand crafted and finished by skilled artisans. Due to the handcrafted nature of this item, dimensions are approximate and will vary slightly from piece to piece.  Due to the natural materials used (wood) grain pattern and colour will also vary.

Be the first to review “Comb, fancy carved” Cancel reply 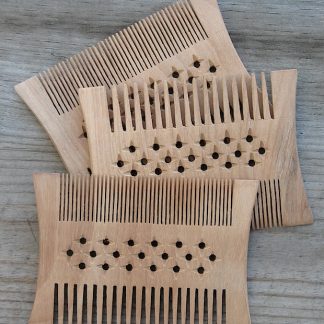