Dice with solid dots or ‘pips’ gradually replaced the ‘ring and dot’ style used throughout Europe from Roman times during the Tudor period. Specially made for us, as genuine bone dice are not readily available.

Bone dice come as is, and to highlight the dots simple period methods included lamp black or red clay smeared over the surfaces and then the surface cleaned back. 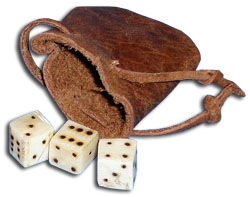