Game of the Goose

Only 5 left in stock

This Late Tudor race game is a simple game of chance that may be played for money or just for fun. It is said that it was invented for Francesco de Medici who gave it to the miserable Philip II of Castile to cheer him up. Philip was soon afterwards to lose his Armada so was probably quite glad of a bit of entertainment.

John Wolfe, who described the game as The Newe and Most Pleasant Game of the Goose, registered it in London in 1597. A great historic children’s game, or one for parties and gatherings; and one of very few which are suited to more than two players.

Game play; Players race around the spiral course on the roll of two dice. Landing on a goose double the score. Hazards such as the maze, well, tavern and prison hamper the progress of players. First player to the middle of the board is the winner.

Be the first to review “Game of the Goose” Cancel reply 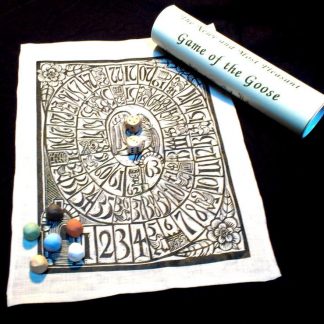