Gluckshaus or House of Fortune

Only 1 left in stock

Gluckhaus or Gluckshaus is High German for ‘house of fortune’ and is a simple gambling game. It originated in Germany in the late 15th century but quickly, in various forms, spread across Europe, becoming known as House of Fortune or Lucky Pig in Britain. It is one of the first stake board games, which eventually resulted in the foundation of casino games in the 19th century.

Coins, jettons, tokens or sweets and so on, are won or lost on the roll of two dice. Coins or jettons are placed on a grid of ten numbered squares. Rolling the number of the square wins you the coin on the square but if the square is empty you lose a coin by placing one there. The King, The Wedding, The Lucky Pig all make life interesting as does the mysterious number 4 (there isn’t one!). Three or more can play and anyone can drop in or out of a game at any time.

The board is made of Linen, with a pair of wooden dice, a set of historic notes and rules, presented in a cardboard tube.

For that authentic feel, metal alloy jettons, coins and leather dice cup are also available for purchase from this site. 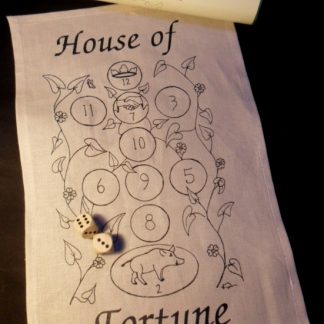 You're viewing: Gluckshaus or House of Fortune $19.95 inc GST
Add to cart