The Wild boar badge of the Yorkist King Richard III (ruled 1483-85) is one of the most well known livery badges o the medieval period. the ‘bore’ may have been an anagram of ‘Ebor’ -the latin name for York.

Wardrobe accounts for 1483 show that thousands of boar badges were produced for Richards coronation. The original from which this replica is copied was found in Sussex and is now in the British Museum. 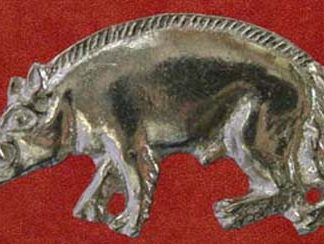