Originally this badge had been described as ‘A three flowered daisy, the two outer flowers shown in profile. This item belongs to a class of medieval badge, commonly represented by flowers or hearts. whose purpose was simply to be exchanged and worn as symbols of true love.’

Further research has suggested that while it may have been used as a lovers token, it is more likely that this badge served as a livery badge by Lady Margaret Beaufort, Mother of King Henry VII (marguerite being the French word for Daisy). Two depictions of Lady Margaret’s badge show a daisy of an almost identical form to that depicted by this badge. 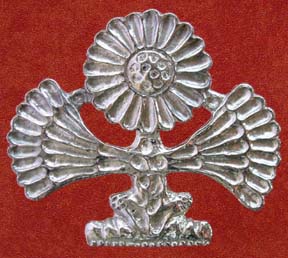