The Game with No Name

In this fast-moving medieval and Tudor game each of two players, on the roll of two four-sided dice, tries to land on, and capture, their opponent’s men, as they chase each other around the board.

This game has only recently been identified as a medieval and Tudor game in Europe, when the similarity of a mysterious engraving on a barrel-top from Henry VIII’s warship the ‘Mary Rose’ to games known from Scandinavia and North Africa was noticed. This discovery supported a previous suggestion that the game was present in medieval England, based on a thirteenth century manuscript from Cerne Abbey in Dorset. Subsequently, other finds, including that of a board from medieval Novgorod, in Russia (spotted by someone not unconnected with The Historic Games Shop!), have added to the evidence for the history of this game.

However, there is as yet no documentary evidence telling us what the game was called by its medieval and Tudor players – hence ‘The Game with No Name’!

The game starts with two players each placing thirteen men, plain side up, along one side of the board
Players take turns to throw the two special 4-sided dice; a throw of one (an ace) on either die allowing men to be turned over (cross side up) and to enter play
Once in play men move a number of positions according to the throw of the dice; first towards the ‘bottom’ of the board, then ‘up’ the central line towards the pointed end, then down their opponent’s side of the board
Pieces are removed from the board when an opponent’s piece lands on it
The winner is the first player to remove all their opponent’s men

All games come with historic notes and full rules in a capped cardboard tube. 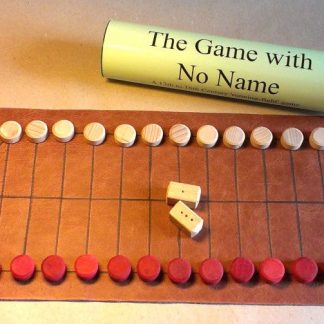