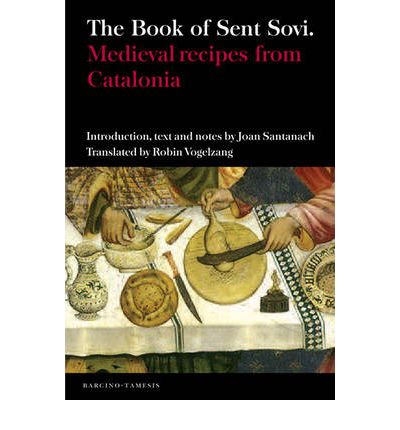 [dropcap style=”no-background”] N [/dropcap]ormally, when I recommend a cooking book, it’s for the redactions. Someone has translated a medieval manuscript, and then given a redaction of that recipe in an easy to understand modern format. There’s an ingredient list, and a step by step method – in the order the steps have to be done in. Sometimes the original recipe (Translated to english is given), sometimes just the source of where the recipe was taken from.

The Book Of Sent Sovi is a little bit different. On the left, the original text in Catalonia. On the right, the English translation. So it’s up to the reader to determine quantities of each of the ingredients listed. Fortunately, aside from the quantities, it is quite specific, listing the various herbs and spices to be used in the dish. (It even specifies to use white carrots for carrot puree which is a very important distinction speaking as someone who tried to make orange carrot puree. No. Just no.)

But for the inexperienced, there are plenty of ways to mess up these recipes up. Too much spices to one dish will cause it to be inedible, not enough, and it’s too bland.

The recipes are not in any particular order. Some things are loosely together – various sauces for instance are found one after the other. But mostly it’s in the order that the meals came to the original author and were jotted down.

Various foot notes are sprinkled through the text from the editor/translator, explaining various aspects which may have been obvious to a 14th Century Catalonian but not necessarily to the modern reader.

Who this book is for

Who Shouldn’t Buy this book

[tabs] [tab title=”Editor’s Blurb”] Indeed, The Book of Sent Sovi, like any other gastronomic treatise, was seen as a practical text, a working tool at the service of cooks, and, as they used it, they added to it, cut out some of the recipes, and added refinements and futher details on specific aspects of the dishes. Far then, from being the work of a single authour, we a dealing with a text that reflects a great swathe of the culinary tradition and the tastes of a whole period of history that we might describe as the dawn of Catalan Cusine. [/tab] [/tabs]