This badge, the original of which was found in Norfolk, depicts a famous episode from the life of St Edward the Confessor. He is shown giving his ring in alms to a hair shirted pilgrim who is later revealed to be St John the Evangelist. The badge dates from the reign of King Richard II, who was a fervent devotee of St Edward.

Be the first to review “St Edward the Confessor” Cancel reply 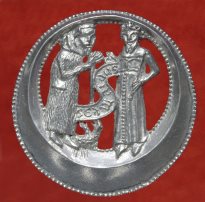