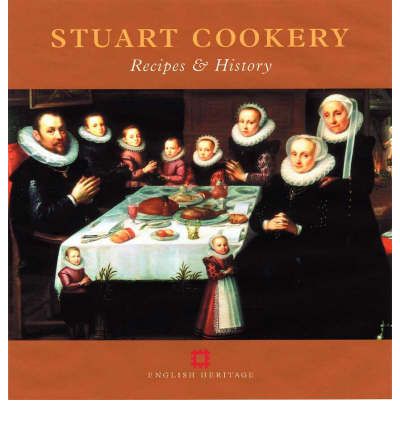 This is a cute tiny little book. It’s like the size of my hand from pinky to thumb outspread. Adorable.

The initial recipe is given and then a redaction is provided in the modern manner with the list of ingredients required at the start. (There is a bibliography but the recipes aren’t linked back to their original texts which is a bit disappointing.)

Aside from the recipes, it talks briefly about various ingrediants that they had – the new ingredients coming from the new world (including coffee from Arabia and Turkey) and the changes to baking thanks to improvements in this technology.

This is a pretty basic little book. Anyone who has other Stuart cooking books or others from the general time period would pretty much have everything this book has to offer.

But, for those just starting out, it’s a pretty inexpensive way to get a handle on what they had (both equipment and ingredient wise) and so it is a good book for beginners.

[tabs] [tab title=”Publishers Blurb”] Including over 30 recipes from the 17th century, this book also reveals the turbulent history of this troubled time when the country cast off its medieval traditions. It describes how new and more sophisticated tastes were reflected in the diet of the nation and the way people cooked and ate their meals. French cuisine became popular with the gentry; the medieval great hall was replaced by a smaller and more intimate dining room, and pottery dishes and bowls were used instead of wooden ones. The introduction of the fork improved table manners and the population enjoyed a variety of new foods – in particular, the exciting imported beverages of tea, coffee and drinking chocolate. The recipes include several that reflect the new baking skills developed during this period and the important introduction of the pudding cloth. Sack Posset (a favourite of Samuel Pepys), Knot Biscuits, Shropshire Cakes and Quaking Pudding are just a few of the many intriguing recipes to try at home. Illustrated in full colour and black & white, including some mouth-watering examples of Stuart delicacies. [/tab] [/tabs]