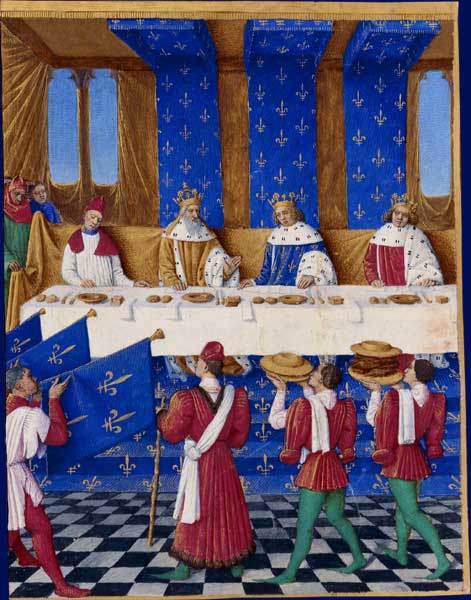 Something that I think more people should look into is manners. We spend all this time on clothing and cooking but not on how the food was presented, why it was presented the way it was, and how good mannered people functioned in society in general.

So here’s the most comprehensive book available on the subject for 14-15th century re-enactors. Available free online!

The first link is mostly just the editors summaries as given in the sidenotes, and is a condensed version of the original text.

The second link has the original text (in digital form) and then the editors summaries from the first link on the right. It’s a bit harder to follow though, as it appears a bit disjointed in this form and the original text.

Early English Meals and manners is a collection of various texts and poems which detail aspects of manners and dining in the 14-16th Century English time period. (I must find some texts about France and other countries manners because that would be awesome to see the differences between the various countries.)

Boke of Nature
John Russell is known to have lived in 1415 but his date of birth and death are unclear. It’s likely that the Boke Of Nature is early 15th C, although it is most likely based on an early text which would be late 14th Century.

This particular version of the text includes sections of the Boke of Carvery, which is a known 16th century text so the book has been copied several times since the authors death.

The table manners described in the Boke of Nature, are for a pretty noble table, as John Russell was in service to the Duke of Gloucester when he wrote this book.

It’s still a fascinating read into the intricate manners of the late 14th/early 15th Century.

Of course, there’s nothing quite like a physical copy of a book, so here’s the link to the book on book depository.

Feature image is of a banquet given in Paris in 1378 by Charles V of France (center, blue) for Charles IV, Holy Roman Emperor (left) and his son Wenceslaus, King of the Romans. Each diner has two knives, a square salt container, napkin, bread and a plate; by Jean Fouquet, 1455?60.

We sell napkins on our store, so if you need nice napkins for your feast kit, check them out.