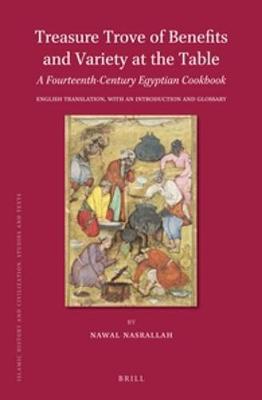 There’s an exciting new translation of a 14th century Egyption Cookbook. It’s the first time it’s been fully translated into English.? What’s even more fascinating is that the author takes the time to talk about things that aren’t mentioned a great deal in the usual European sources.?

It talks specifically about how to make bread (delicious bread, which uses milk instead of water) and about various egg recipes. (A few European sources mention eggs briefly, but mostly to say that everyone knows about eggs so there’s no need to talk about it). It specifically talks about the kind of wood that a cook should use “pick dry firewood, which does not create a great deal of smoke due to it’s wetness, such as olive or dry oak. Wood of oleander and trees with milky sap and the like must be avoided, as should firewood from the fig tree and any wood high in moisture”. And there’s an entire chapter on incenses.

Nawal Nasrallah is a fantastic translator. The book is extremely informative without being too dry. (Nasrallah uses the index and glossary to go super in depth about the translation and to talk specifically about why particular translations should be used which is also extremely instructional.)

Overall, this is an excellent collection to anyone’s medieval cookbook collection.

There is also 22 modern adapations of some of the recipes in the appendix, complete with beautiful food photography. Dried apricot stew looks pretty good!

Buy it now on Book Depository

The fourteenth-century Egyptian cookbook, Kanz al-faw?’id fi tanw? al-maw?id, is a treasure trove of 830 recipes of dishes, digestives, refreshing beverages, and more. Here, for the first time, it has been meticulously translated into English and supplemented with a comprehensive introduction, glossary, illustrations, and twenty-two modern adaptations of its recipes.