Dice, due to their portability, and their unpredictability when rolled, became the essential tool of the medieval gambler. Numerous dice games, from the simple and silly to quite complex games of strategy are known from the medieval period. The most common dice are the 6 sided however, 7-sided dice are stated in the 13th century Libro de los juegos to have been invented by Alfonso X in order to speed up play in chess and tables variants. This dice is unlike any modern variant.

The size of dice also varied from the quite large to tiny as did the materials from which they were made including wood, clay, bone, ivory, and in rare cases metals such as silver. Loaded dice and shaved dice have also been found.

Be the first to review “Dice, 7 sided.” Cancel reply 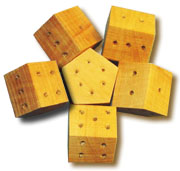