A middle to late Anglo-Saxon hooked tag (dress hook) of triangular form. The front of the tag is decorated with a geometric interlace pattern. The back is plain. The original shows evidence of two attachment holes , but a fracture across them has resulted in the loss of a piece of metal from the top of the tag. The end of the hook is also missing.

Hooked tags were used to fasten clothing and possibly small bags and purses. They occur in various forms from the late 8th C. onwards, but those with triangular head plates seem to become popular from the 9th C. onward.

Manuscript’s also show winingas wrapped spirally around the lower leg. Hooked tags of various types are often found just below the knees of skeletons; a pair of hooks were found below the kneecaps of a male skeleton in Birka grave Bj903, and similar bird or mask-like hooks were found at ‘Ryurik Gorodische’, near Novgorod, 9-10th century. Small silver hooked tags were found in a similar position in a 9th century burial at Winchester, England. The location of the hooks as found in the graves make it reasonable to assume that their function was to hold up the winingas. 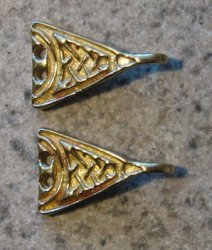