Only 1 left in stock

The Chirst within a cruciform nimbus. By the 14th century the Sudarium or Veronica had become Rome’s principal relic. This relic was reputedly the cloth on which St Veronica had wiped the sweat from Jesus’ face on the way to his crucifixion. Miraculously, his features were imprinted onto the cloth, which, by the 8th century had found its way to Rome and by the 14th century was exhibited at St Peter’s every Sunday. Souvenirs of this relic, known in England as Vernicles, were highly prized and are mentioned in both Chaucer’s Canterbury Tales and Langland’s Piers Plowman.

Be the first to review “The Veronica” Cancel reply 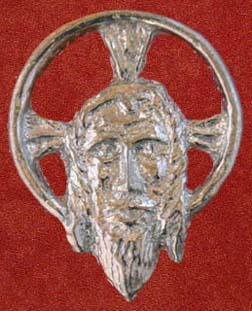