Three fishes. The design of three fishes occurs on a number of occasions in medieval art and is probably intended to be symbolic of the Trinity. In early Christian art the fish is used as a symbol of Christ, as the letters of the Greek word for ‘fish’ make the initial letters of ‘Jesus Christ, Son of God, the Saviour’. The cult of the Trinity achieved widespread favour in the middle ages, Edward the Black Prince being a lifelong devotee of it, and such badges would have been worn as symbols of an individuals devotion to this cult. The original of this badge was found at the abandoned 15th century village of Walraversijde, near Ostend, Belgium. Produced in association with the Provincie West-Vlaanderen / Institut voor het Archeologisch Patrimonium. 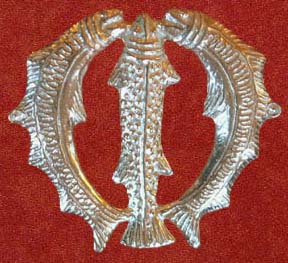