This is a replica of a so-called ‘satirical’ deck of cards by the German artist Peter Flötner c.1540. It has traditional German suit symbols; the Knave and Queen of French-suited decks are represented by the Ober and Unter of each suit, and there are no Aces. Such decks of 48 cards were used primarily for the early trick-taking game Karnöffel, the earliest recorded card game. The game was popular among the lower classes, and the naughty and satirical scenes depicted reflect this. The rules for Karnöffel are included.

The backs are blank as was common on early cards; and cards are not coated or laminated. 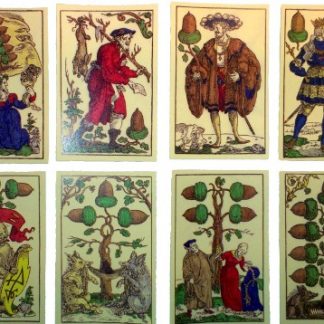