Five Lines is one of the oldest board games known, coming from Ancient Greece where it was known as Pente Grammai. Around 600 BC the Greek poet Alkaios referred to the game in one of his poems and gaming tables in terracotta with the typical five parallel lines have been found in graves dating to the same period.

During the decades around 500 BC the Athenians imagined Ajax and Achilles playing the game during the siege of Troy. Five Lines, or ‘the game of the heroes’, was regarded as a noble game for centuries and was very popular; as it was during Roman Imperial times, when a number of descriptions of the game occur in contemporary literature, and boards with rectangular grids can be found scratched into pavements in Roman towns.

Be the first to review “Five Lines” Cancel reply 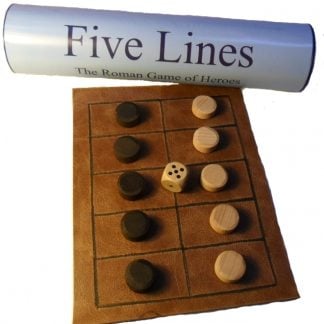