Tabula – The Roman Origins of Backgammon

Only 2 left in stock

Tabula is the name the Romans gave to both a game board and a range of games – the very earliest ancestors of backgammon. When the Emperor Zeno played one of these games in AD 480 he threw dice which gave him such a score that he believed he could not possibly win. He was so upset that he put stylus to wax tablet to record the event. The game has been reconstructed from his writings.

This ancient ancestor of backgammon is a fast-moving and strategic game for two players. Comprising a leather board, wooden counters, and three wooden dice.

All games come with historic notes and full rules 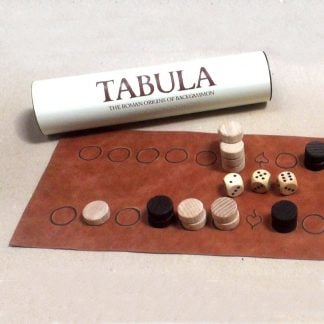 You're viewing: Tabula – The Roman Origins of Backgammon $24.95 inc GST
Add to cart